Posted on 25 April, 2013 by greatemancipator

Apart from the fact that most users of Rawcliffe Meadows don’t appear to know much whether it be the fact that it’s not owned or managed by the City Council, that it is part of the plan to stop the City flooding, or that it’s probably been managed back to Roman times, they won’t actually see much happening there apart from the annual hay cut and occasional work party.

But when the volunteers or contractors aren’t clearing flood debris, managing the shrubs and trees, or putting up nest boxes there is still a lot to do in the background, including paperwork and fundraising. There are also plants to propagate, especially since rather than buying packets of seed from a shop, the Friends prefer to ensure local provenance by collecting the seed from plants on the site or from an adjacent one. A current example is that in order to recreate the New Meadow that was ruined by a sewage leak, seed collected locally is being propagated by Brunswick Organic Nursery in Bishopthorpe. They have sown seeds of meadowsweet and great burnet, which are being propagated under glass and will then be pricked out and replanted until they are in 9cm pots. When these plants are strong enough for life in the wild they will be planted out, replacing those lost.

Plant and tree provenance can be quite important when dealing with biodiversity, local climate, and local plant and animal species. Getting the plants right can be key to their survival.

The glasshouses at Brunswick Organic Nursery 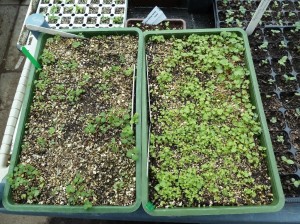 Researcher and practioner in matters relating to egovernment, government ICT and their approach to the citizen.
View all posts by greatemancipator →
This entry was posted in Site Management and tagged Brunswick Organic Nursery, provenance. Bookmark the permalink.