Posted on 23 August, 2013 by greatemancipator

The work party on the evening of 22 August was focused on pulling out the large amount of Himalayan balsam that had seeded along Blue Beck. Blue Beck is the drain that starts at Rawcliffe Lake on the other side of Shipton Road, proceeds behind some of the houses there until culverted under Shipton Road and rising again in a weed-infested field still under NHS Trust ownership north of Clifton Hospital. Given that the field is full of Himalayan balsam, removing it from Blue Beck is possibly a waste of time but one of the prescriptions within our Higher Level Stewardship is that noxious weeds are managed.

Blue Beck was once a highlight of the site with an important population of water voles until in the panic following the flooding in 2000 the Internal Drainage Board made some radical alterations to the depth and width of the drain altering water levels and destroying the habitat. There was also a tansy beetle population there, but the dumping of dredgings and other activities removed that too.

With Judi, Carol and Helen pulling the balsam on the sides, and Mick walking up the drain with its relatively low water level, a great deal of the plant was extracted. A few small holes in the bank were sighted but with the low water levels it is unlikely that the voles are back.

There is more balsam near the outlet into the Ings Dyke and Mick made some attempts with a scrub cutter. However, much of the weed is down inside the banks and that is a more difficult channel to deal with. 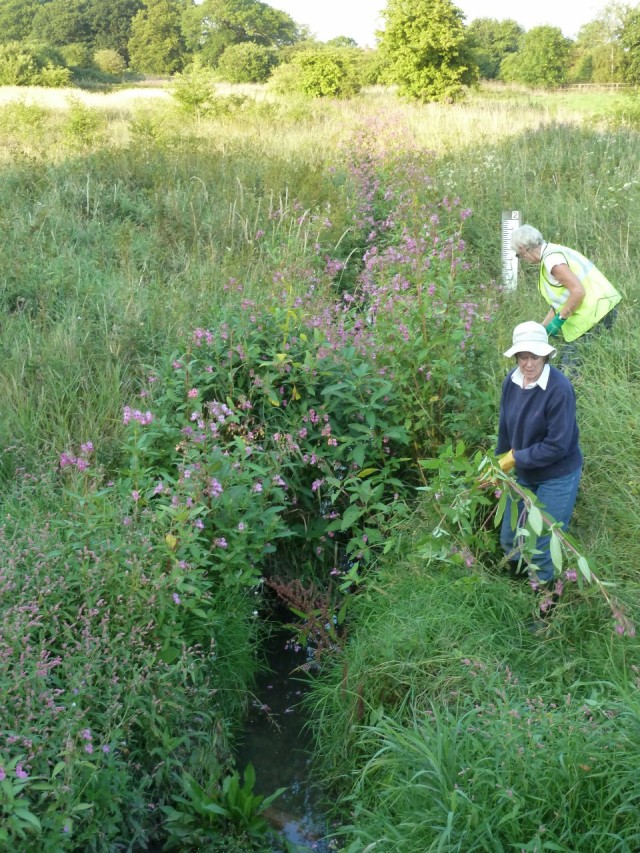 Researcher and practioner in matters relating to egovernment, government ICT and their approach to the citizen.
View all posts by greatemancipator →
This entry was posted in News item, Work Party and tagged Blue Beck, Himalayan balsam, Ings Dyke, Internal Drainage Board, water vole. Bookmark the permalink.