Posted on 24 August, 2013 by greatemancipator

For a number of years Dr Geoff Oxford of York University has organized a survey along the banks of the River Ouse up and downstream from York to monitor the population of tansy beetles that are limited to that area of the UK. Volunteers from the Tansy Beetle Action Group can be seen through late August and early September staring at clumps of plants along the River Ouse. For the last couple of years Rawcliffe Meadows has warranted its own survey and this we carried out one sunny midday last week.

The survey involves using a GPS to mark the locations of stands of tansy, the plant is searched for the presence of the beetles and notes about the size of the clump of plants, the numbers of beetles (if any) found, and how the area of the plant is used i.e. whether pasture, arable or recreational.

Given the sensitive nature of the beetle populations, with flooding, grazing and cutting all being threats to their food plant, the collated data will help volunteers manage populations. The Friends of Rawcliffe Meadows have been lucky enough to get some funding from Yorkshire Water to be employed in increasing tansy planting on the site, along with improving existing plantations. We already know the plants enjoy pretty full sunlight, and neighbouring vegetation being controlled, so now we’ll look for any additional factors that might help increase beetle populations. 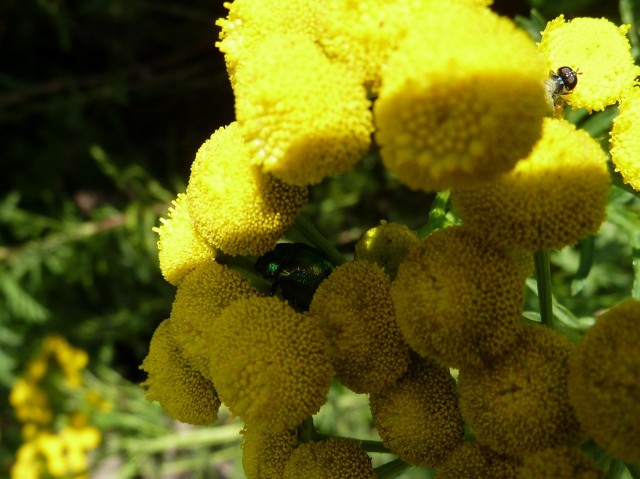 Researcher and practioner in matters relating to egovernment, government ICT and their approach to the citizen.
View all posts by greatemancipator →
This entry was posted in News item and tagged tansy, Tansy Beetle Action Group, tansy beetles, TBAG, Yorkshire Water. Bookmark the permalink.