The Tree Sparrows of Rawcliffe Meadows

Posted on 29 November, 2013 by greatemancipator 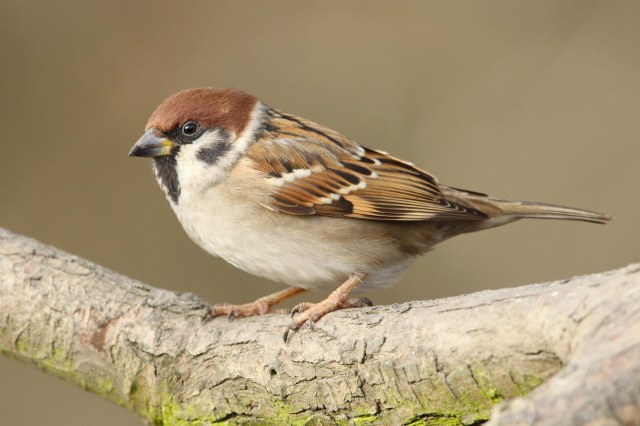 At this time of year, Rawcliffe Meadows is an excellent place to see Tree Sparrows, especially around the Cornfield, Copse and flood basin. This bird occurs all year round but numbers usually peak in late November and early December. We currently have at least 150, with previous peak counts exceeding 250. Tree Sparrows are easily recognised by their chocolate brown caps and dark cheek-spot; unlike House Sparrows, the male and female look alike.

Tree Sparrows usually nest in holes in old trees but take to suitable nest boxes and sometimes make nests in bushes – a few of our pairs nest each year in a thickety blackthorn hedge. This is a sociable bird, preferring to nest in loose colonies, hence the clusters of nest boxes in the Copse. It feeds on a range of plant seeds though the chicks require plenty of insects to provide them with the protein to develop.

Although a few individuals can live ten years or more, Tree Sparrows are typically short-lived birds with an average lifespan of just two years. They are also very mobile but we know little about how and why they move around. In some years we have had large congregations earlier in the autumn (probably after moulting) and in late summer (possibly comprising juvenile birds). Friends of Rawcliffe Meadows are working with local bird ringers to try to find out more.

Nationally, Tree Sparrow numbers began to crash in the late 1970s. Populations have been more stable since the mid 1990s but, as the BTO website explains, “it should be remembered that for every Tree Sparrow today there were perhaps 30 in the 1970s, and any recovery therefore has a long way to go”.  Population decline has been put at 93% between 1970 and 2008, and the species is recognised as a threatened ‘Red List’ bird in the UK. The RSPB estimates the current British breeding population to be around 68,000 pairs. Tree Sparrows are also in decline in many other countries in western Europe.

The Tree Sparrow’s decline reflects the increasing efficiency of farming methods: modern arable crops are virtually weed-free, today’s combine harvesters leave very little spilt grain and the acreage of over-winter stubbles has diminished. Loss of nesting sites has been another factor: the population at Rawcliffe Meadows took many years to recover from the removal of dead elm trees in 1990 and ash dieback disease may be a long-term threat if, as expected, it results in a major loss of hedgerow trees.

The Vale of York has long been a stronghold for Tree Sparrows and Rawcliffe Meadows is an important hotspot. Like many hole-nesting birds, Tree Sparrows need lots of potential nest sites in order to avoid build-ups of parasites like ticks and fleas. The numerous nest boxes in the Copse help maintain this supply. Insect-rich seed crops and grass margins in the Cornfield provide parent sparrows with an abundance of protein for their chicks, as do the numerous pools in the flood basin (studies have shown that wetland insects are really important for Tree Sparrow chicks). The 1.5 hectares of wildlife seed crop grown in the Cornfield each year provide a huge larder for seed-eating songbirds in autumn and winter.

Researcher and practioner in matters relating to egovernment, government ICT and their approach to the citizen.
View all posts by greatemancipator →
This entry was posted in Wildlife Report and tagged Passer montanus, tree sparrow. Bookmark the permalink.