Posted on 6 February, 2014 by greatemancipator

Before the Park & Ride site was developed, the arable fields which stretched from Rawcliffe Meadows to the Outer Ring Road supported threatened farmland birds such as Grey Partridge, Skylark and Corn Bunting. The Cornfield Nature Reserve was set-up in 2001 to maintain an area of arable habitat next door to the Clifton Washland when Rawcliffe Bar was developed.

With hindsight, the 4.5 hectare field was too small and isolated to maintain breeding populations of these species. Other factors have included the more wooded landscape which has developed as plantations in the Country Park have matured, and the high level of predation by Foxes and crows. Skylarks did well initially, with up to five pairs nesting, but numbers dwindled and none have bred for four years.

Under the current Stewardship agreement, we manage 2.5 hectares of the Cornfield under the ‘arable fallow’ option: it is ploughed each spring but then left unplanted, creating open ground with naturally-regenerated vegetation. This was intended to provide optimal Skylark habitat but no longer serves that function. We also have major problems with perennial weeds such as horsetail, couch grass and creeping thistle, which flourish in the fallow land – a legacy of the Council’s initial mismanagement of the field before FoRM took over.

At the same time, we urgently need some ‘fall back land’ on which to ‘park’ the cattle if the meadows become too wet or flood suddenly in autumn. Aftermath grazing (after the hay cut) is an essential part of hay meadow management, but keeping cattle on wet ground can cause trampling damage. It is not easy for our grazier to remove all the cattle at once, so having some additional grassland off the floodplain would allow us to take the cows off the meadows (or reduce the numbers) as and when necessary. This would help protect the SSSI grassland and avoid damage to the barrier bank, which forms part of York’s flood defences.

FoRM had long hoped that we would be able to use a field on the Clifton Hospital site but this is no longer a realistic prospect – a planning agreement concerning the hospital fields was supposed to come into force back in 1996 but has never been enforced by City of York Council.

So, we are now proposing to put 1.5 hectares of the Cornfield down to grass. This would create additional meadow habitat and would benefit the threatened Necklace Ground Beetle, found in the neighbouring Copse Meadow in 2013. The area of arable fallow would be reduced to 1 hectare, making it easier to manage this habitat more effectively for scarcer arable plants and invertebrates. The area of 1.5 hectares used to grow wildlife seed crops would remain the same – these are very successful in providing foraging habitat for songbirds including large numbers of threatened species such as Tree Sparrow, Reed Bunting, Yellowhammer and, during cold weather, Corn Bunting.

The new grassland would be sown using a mixture of native grass seed and hay bales from Clifton Ings. Once established, it would be cut for hay along with the meadows each summer then used for grazing for short periods, as and when the floodplain becomes wet. 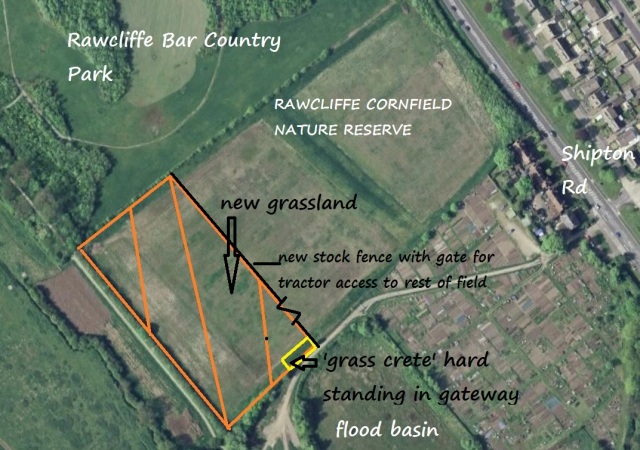 Researcher and practioner in matters relating to egovernment, government ICT and their approach to the citizen.
View all posts by greatemancipator →
This entry was posted in News item and tagged Cornfield. Bookmark the permalink.