The Ups and Downs of Tansy Beetle Numbers at Rawcliffe Meadows

The Pond at Rawcliffe Meadows was excavated in May 1991, and the mounds and funnel that surround it were created from the spoil. Although Tansy Beetles had been seen along the Ings Dyke, that runs between Rawcliffe Meadows and Clifton Ings, and Blue Beck, that runs across the top of the site into the Ings Dyke,  previously and one copulating pair was found by Pond in 1993. These beetles had disappeared in 1994 but instead some were found that year in the New Meadow, just north of Blue Beck.  In 1994 some Tansy Beetles were found in the Blue Beck Copse ( a rough patch planted with saplings in 1993 between Blue Beck and the New Meadow) and alongside the hedge at southern end of Rawcliffe Meadows. The populations appeared to remain small from then onwards.

There were sightings by the Pond in early 2000 but beetles were not seen later that year probably due to the severe flooding of the River Ouse that summer, although beetles were noted by the Blue Beck and Ings Dyke in 2000.

Beetles were sighted by the Pond again in June 2001 and in 2002 they were noted again by Blue Beck (on 8 April), plus at the Pond and by the New Meadow. The  2004 record was 100 by the Pond, a further 36 on the Ings Dyke bank (at the north by theold oak tree) and 101 on the Blue Beck bank with an additional 3 seen on the New Meadow and  4 near cattle grid leading the Copse.

In 2006 121 were counted at the Pond, with several on the New Meadow. Unfortunately in the previous year the Blue Beck verge was massacred by the Internal Drainage Board and that expanding population of plants and beetles were wiped out. Beetles continued to be sighted at the Pond and New Meadow during 2007.

By 2010 the Pond mounds were noted as a major habitat, and planting of tansy was extended further over  them. Unfortunately there were none recorded that year in the New Meadow

In 2012 the western edge of the New Meadow was fenced off to protect tansy and beetles from grazing and eight beetles were introduced from the Pond in June of that year and the count in late August had a total of 175. By that year we had recognized the significant effect that shading had on tansy plants, and hence beetles so that with the assistance of funding from Yorkshire Water which we received in 2013 we began cutting back and coppicing trees shading the Pond mounds, along with pollarding the trees overlooking the western edge of New Meadow (winter 2013/spring 2014). We also introduced cutting around  the tansy patches at the Pond, New Meadow and plants that started to reappear alongside Blue Beck. The count for 2013 was 208, which jumped to 368 in 2014 with all the care and attention to surroundings (with 60 on western edge of New Meadow and a single one to the south).

Following discussion with Geoff and Roma Oxford of the Tansy Beetle Action Group (TBAG) we decided in 2013 to manage the area to the south of New Meadow for tansy, along with the area near the cattle grid, and those adjacent to Blue Beck and the Ings Dyke where there were existing records of beetles. This has been started by regular cuts of the competing vegetation, and then fencing where practical. Other actions will be considered as we learn more about tansy, the beetles and their habitat needs.

With Rawcliffe Meadows being home to between 10% and 20% of the UK population of Tansy Beetles we feel it is important to try and increase our own stock of beetles in a manner that will leave many protected in the event of the unseasonal floods or other environmental issues that might wipe out an isolated population. The graph below should demonstrate the improvement to the populations, possibly as a result of improved management, whilst the Blue Beck, Ings Dyke and Cattle Grid are areas that once supported plants and beetles but being reinstated. We look to see what happens in 2015 and onward. 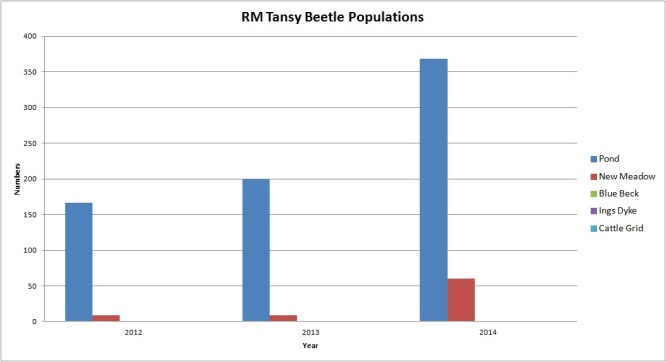 Researcher and practioner in matters relating to egovernment, government ICT and their approach to the citizen.
View all posts by greatemancipator →
This entry was posted in Wildlife Report and tagged Chrysolina graminis, tansy, Tansy Beetle, Tansy Beetle Action Group. Bookmark the permalink.