Posted on 11 April, 2015 by greatemancipator

As we plan events for the year ahead the Friends of Rawcliffe Meadows will be looking to find a way to celebrate their silver anniversary. It’s difficult to pick an actual date as the verbal agreement to manage the area on behalf of the National Rivers Authority (precursor to the Environment Agency) and Sustrans probably occurred in the autumn of 1990, whilst the first work part took place on the 30th December 1990, and it wasn’t until February 13th 1991 that a meeting was held in the Board Room of Clifton Hospital to propose the draft management plan and seek volunteers to expand the Friends of Rawcliffe Meadows. 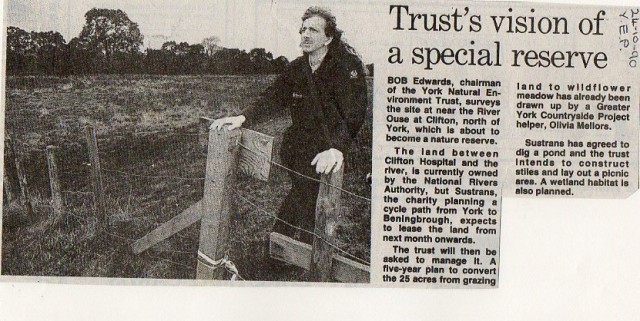 We could have a celebration of some description on the 3rd January 2016 but everyone will be recovering from Christmas and the New Year, so that may be a more practical event. In the coming months we’ll be doing something to mark the work of the late Bob Edwards, who as YNET Chair did so much practical work on the site, along with the that of the late Enid Ord, who also helped.  However, at some time when the sun is shining and there is less work to do perhaps we should celebrate the thousands of volunteer hours that have turned some fields into a Site of Special Scientific Interest (SSSI).

Researcher and practioner in matters relating to egovernment, government ICT and their approach to the citizen.
View all posts by greatemancipator →
This entry was posted in News item and tagged Bob Edwards, SSSI. Bookmark the permalink.