Posted on 8 June, 2015 by greatemancipator

For the first public walk of the year the weather was warm and largely sunny, if slightly windy, however that didn’t stop a dozen people coming to the Meadows to hear all about Tansy Beetles from Geoff and Roma Oxford, who probably know more about this endangered species than anyone else.

Geoff started with some background to the beetle and its life, behaviour and the various studies he, Roma and his postgraduate students had made. They also passed around living specimens of eggs and larvae from Roma’s captive breeding programme. At the last annual count (2014) there was a population on the River Ouse of about 21,000 beetles but had been as low as 2000 when the floods and weather had been less kind to them. So with a very small isolated pocket of the beetle in Cambridgeshire and an attempt at reintroduction near there, further work was being done by the Tansy Beetle Action Group (TBAG) and a Conservation Officer working for Buglife to improve the beetle’s chances.

Mick then gave a brief background to the site and the management activities related to conserving the Tansy Beetle before leading to an area that had recently been cleared and plants established, but yet without beetles. He then led to the New Meadow where an early habitat had been expanded and improved by coppicing and pollarding trees that were shading plants, along with more plants being added. This area was alive with Tansy Beetles and people had the opportunity to see them in situ and ask questions. They also saw a Nursery Web Spider on the tansy – spiders being Geoff’s field of expertise.

The group then went down to the bank of the Blue Beck and could see the issues surrounding having plants along watercourses when the drainage authorities wished to dredge channels. There were also a few beetles on one plant that had somehow arrived there.

To conclude, the group wanted to visit the Norther Marsh Orchid site and on the way there caught sight of a pair of Roe deer. 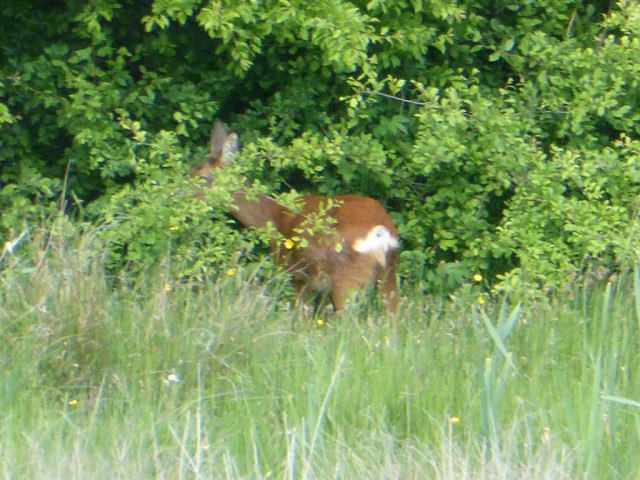 There are two more talks still to come under the Beetles, Bug and Butterflies umbrella, along with a landscape  history walk, and a few more in the planing stages. Get on our mailing list to be kept up-to-date.

Researcher and practioner in matters relating to egovernment, government ICT and their approach to the citizen.
View all posts by greatemancipator →
This entry was posted in General, News item, Wildlife Report and tagged Northern Marsh Orchid, Roe Deer, Spiders, Tansy Beetle. Bookmark the permalink.