Posted on 6 September, 2015 by greatemancipator

Masha and I met with Ann Hanson and Kate Wright of the Yorkshire Mammal Group (YMG) at 6:30 on the Friday evening, along with Gareth Barlow of BBC Radio York, to set 50 Longworth traps around the Reservoir Basin at Rawcliffe Meadows. Gareth was recording for his Sunday morning farming programme. The first sighting, by Gareth, was a fox grooming itself on the bank of the basin, but he soon moved as we approached. We then set traps around the main scrape before heading to put them in a smaller but promising-looking scrape and then along the allotment bank amongst the brambles and blackthorn. We also found a pile of roe deer droppings on one of the amphibian mats CH2M must have left behind from their survey. The traps had all been supplied with some cosy bedding in the form of straw and an ample supply of food for any dietry requirements – there was little chance of any visitors being cold or hungry.

The following morning at 9:30 we gathered again with Ann, Rober, Kate and Mary from YMG and Judi, Mark, Masha and Mick from the Friends to empty the traps, along with checking and removing the water vole rafts set some months earlier.

We worked our way around the traps, identifying the species, sexing and weighing them, then releasing them. Out of the fifty traps, eleven still had occupants and these consisted of five common shrews (including a rather pale or leucistic one), three wood mice, two water shrews and a bank vole. A video of one vole before its release is on YouTube. One of the rafts had a massive water vole latrine, as had been reported from earlier monitoring, but others also had water vole droppings, and some other small mammals had taken the opportunity to toilet in them. Ann will be providing a full report in the winter but said that numbers and species indicated a rich inverebrate habitat. 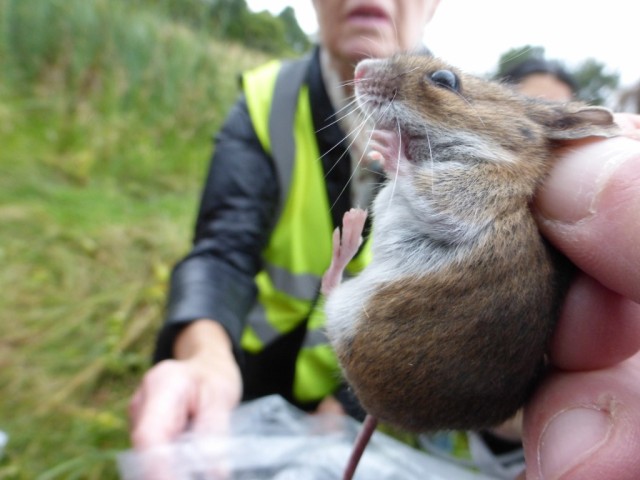 Our thanks must go to the Yorkshire Mammal Group for all their help over the summer and particularly over the weekend. We now have a much better idea of our small mammal population.

Photographs of the mammals are on our Facebook page.

Researcher and practioner in matters relating to egovernment, government ICT and their approach to the citizen.
View all posts by greatemancipator →
This entry was posted in News item, Wildlife Report and tagged BBC Radio York, Gareth Barlow, mammals, Yorkshire Mammal Group. Bookmark the permalink.