Posted on 10 April, 2016 by greatemancipator

A big thanks to the big turnout this morning! Pete, Jason, Mark and Mark (with commiserations to other Mark who was poorly in bed!) Julie, Ron, and three newbies Gavin, Dean and Frankie making 10 in total including Mick. 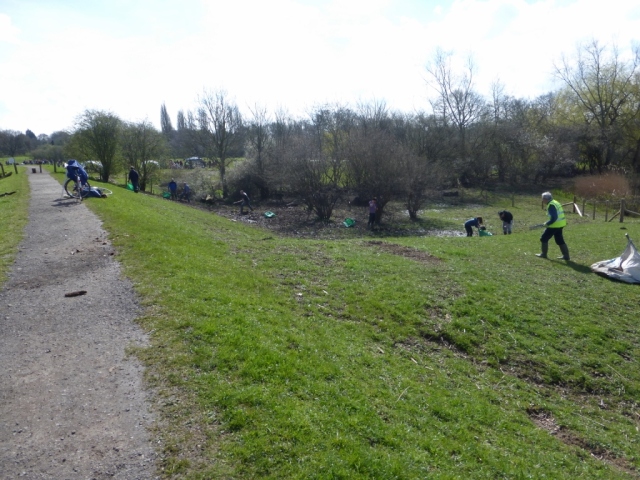 The task was to rake up the flood debris to the east of the Pond on what is lovingly known as ‘the Funnel’ and get as much of the woody material into Cricket Field Copse whilst the leaves were piled up in the middle of the Hazel coppice. Jason found a small frog or two, whilst Dean saw something reptilian disappear down a whole as he cleared the leaves – we’ve no idea what that was.

In the absence of any coffee a break was made to see the large population of Tansy Beetles on the northernmost mound by the Pond.

On Friday 15th the Yorkshire Wildlife Trust volunteers will be helping us by planting around 260 tansy plants by the Ings Dyke within the fenced off area near the Pond.

On Sunday the 17th April from 10:30 we are due to plant 50 common birdsfoot Trefoil (Lotus corniculatus), 50 meadow vetchling (Lathyrus pratensis) and 50 common knapweed (Centaurea nigra) in the Cornfield Grassland to increase its pollinator potential.  All welcome!

Researcher and practioner in matters relating to egovernment, government ICT and their approach to the citizen.
View all posts by greatemancipator →
This entry was posted in Wildlife Report, Work Party and tagged flood debris, tansy beetles. Bookmark the permalink.