In the end there were five of us (Judi, Carol, Neil, Mark and Mick) clearing around the tansy surrounding the main Pond. Despite having been cut back a month ago it had shot up and without a track being made to the far side by the scrub cutter it would have been heavy going. The reduction in competing vegetation around the two key areas is certainly showing with the number of plants and Tansy Beetles – the plants are also well chewed by the beetles and larvae.

Sadly, it looks like the plants we tried to establish at the south and east of the Pond have been lost due to the flooding and competing vegetation that survived better. However another area has been cut back and that cut be planted in the near future. 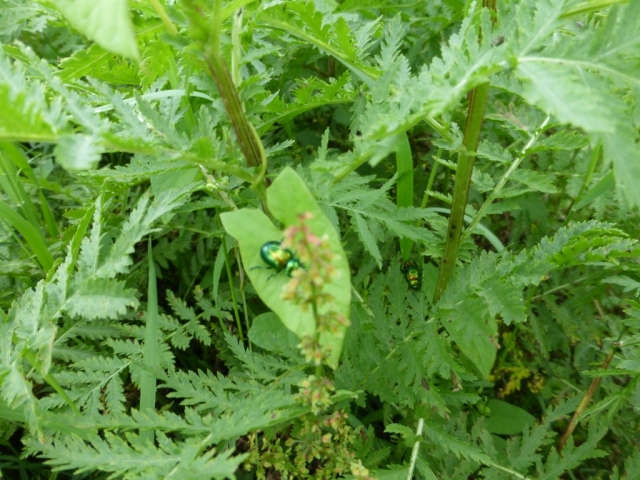 There were also Tansy Beetles eating well on the tansy plants recently planted along the Ings Dyke, and the bindweed, cleavers and nettles need managing in that linear enclosure.

Researcher and practioner in matters relating to egovernment, government ICT and their approach to the citizen.
View all posts by greatemancipator →
This entry was posted in Site Management, Wildlife Report. Bookmark the permalink.