Posted on 19 February, 2017 by greatemancipator 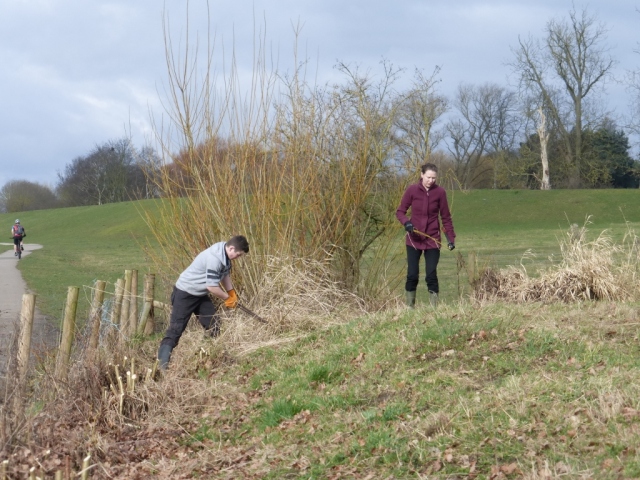 It may have been bad timing to have organised two work parties either side of some school half-terms but there are always other events to work around. In the end we had six volunteers (thanks to Judi, Mick, Masha, Carol, and especial thanks to first-timers Nadine and Ben).

The task had been to coppice the willow stools around the Pond area that could potentially shade the northern mound where we have the majority of the Tansy Beetles on site. In addition we cleared some of the branches overhanging the path around the Pond. The coppiced willow wasn’t thrown away but carried over the Barrier Bank in the hope that a friendly willow weaver will make use of it in due course.

Unfortunately there was no sign of Tansy Beetles yet, although the plants themselves were growing well. There was also no evidence of frogspawn (or any other spawn).

The next work part is just a week away on Sunday 26th February at the Bee Bank in the Cornfield Arable at the north of the site. We’ll be adding some logs to the bank, tidying up the pond at the base of the bank, and if anyone has any suitable wild flower seedlings we’ll be adding them to the pollen sources.

Researcher and practioner in matters relating to egovernment, government ICT and their approach to the citizen.
View all posts by greatemancipator →
This entry was posted in Work Party and tagged coppicing, Tansy Beetle. Bookmark the permalink.