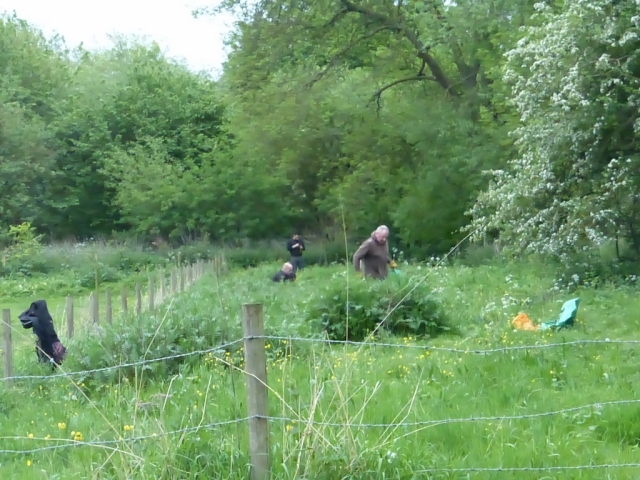 Apologies to anyone who went to the Pond last night, for some reason I was at the New Meadow but Pete and Masha, along with new volunteers Ruben and Mitchell managed to find me, and we got on top of the New Meadow Tansy Beetle enclosure, and saw plenty of Tansy Beetles. Having moved house, passed the YNET accounts to the auditors, started claiming for the shed break-in. along with thinking about repairs and replacements I might calm down, once the election is over…

There were still large patches of hogweed (not the giant variety) trying to reclaim the edge of the New Meadow but the main threats to humans were the clegs and midges (we would recommend anyone sensitive to cover up and take antihistamines in advance).

I won’t be at the Pond next Thursday but Judi will, and weather dependent I will have been down and strimmed (using the one from home) to make life easier. Thursday evening 25th May from 6:30 – cut back vegetation around tansy plants near Pond and fenced-in section of Ings Dyke bank where competing (at south of site). We still have to replace stolen tools so hedge shears might be helpful.

Researcher and practioner in matters relating to egovernment, government ICT and their approach to the citizen.
View all posts by greatemancipator →
This entry was posted in General and tagged tannsy, Tansy Beetle. Bookmark the permalink.