Posted on 19 February, 2018 by greatemancipator

Thanks to Pete & Jason, Mark & Julie, Judi, Masha, Claudia and new helpers Helen and Richard, along with Don our contractor, who were helping us finish off the hedgelaying of the Blue Beck Copse boundary we’d started on the 7th January. Again, we had excellent weather if a little muddy underfoot on the eastern side of the hedge. 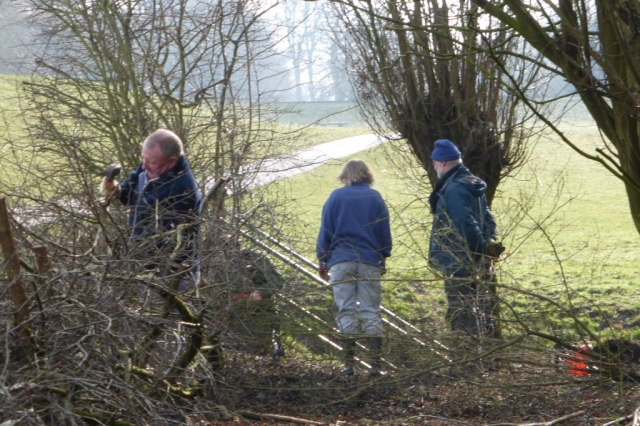 Whilst some carried on with the laying at the southern end, others started to bind the top of the hedge in the tradition of a Midlands’ layed hedge. Everyone was so carried away that work carried on until after 2 pm, finishing the job and making sure that all had a go at learning the various techniques.

There are a few little tidying tasks to complete in the Copse but volunteers will be doing that on other occasions before the bird nesting season. The Blackthorn and brambles in the Reservoir Basin were also cut back ready for the orchids to pop up.

In March we’ll also be planting some more Hazel along the northern hedge line, and in the now more open copse but before then on Sunday 25th February from 10:30 we’ll be coppicing the willow, and some hazel, surrounding the Pond at the south of the site to allow more light for the tansy plants there.

Researcher and practioner in matters relating to egovernment, government ICT and their approach to the citizen.
View all posts by greatemancipator →
This entry was posted in News item, Site Management, Work Party and tagged hedge laying, Rawcliffe Meadows. Bookmark the permalink.