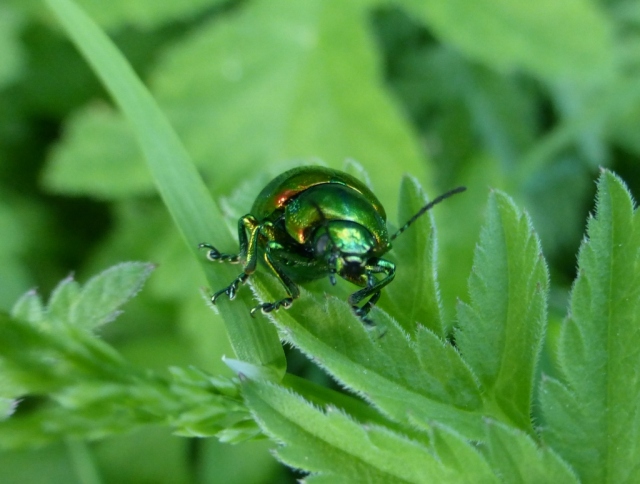 Having started to tackle the competing vegetation by the Pond with the last work party, this time it was the turn of the New Meadow enclosure On another blazingly hot day we were faced with extensive vegetation growth that needed to be cut back to reclaim the tansy clumps.

Unfortunately Judi had limited arm movement due to a serious cut on her arm and after a good start went off to help at an understaffed West Bank Park. This left Pete and Mick until Mark T was able to arrive. The scrub cutter made a wide path through all the area exposing the tansy clumps but disturbing the horseflies that Pete and Mick react badly to and despite the heat had to cover all exposed areas. As with the Pond compound we didn’t have sufficient help to really tackle the area, nor to clear around the tansy by the cattle grid or pull the dock plants intruding into the grassland in front of New Meadow.

Mick was also hoping to feed back on the two and a half-hour meeting with the Environment Agency (EA) the previous week where we learned a little more about their plans for the Barrier Bank, and the ongoing appeal with the Rural Payments Agency (RPA) over their erroneous July 2016 inspection and interminable bureaucracy. Without  a consistent number of volunteers this all becomes fiddling whilst Rome burns in the face of EA engineering plans and RPA bureaucracy. Having managed the site for 28 years this will be a great loss to the wildlife, York and the wilder community.

All being well the hay cut should commence in the week beginning 1st July and we are back at the Pond on the Thursday 5th July from 6:30 pm, and again at the New Meadow on Sunday 22nd July from 10:30 am.

Researcher and practioner in matters relating to egovernment, government ICT and their approach to the citizen.
View all posts by greatemancipator →
This entry was posted in Site Management, Work Party and tagged Environment Agency, Rural Payments Agency, tansy, Tansy Beetle. Bookmark the permalink.