Posted on 13 October, 2019 by greatemancipator

An outcome from the Rawcliffe Meadows Breeding Bird Survey of 2015 had been to place some Tree Sparrow nest boxes on the eastern bank of the Reservoir Basin (just below the allotments) as there was identified to be a paucity of suitable trees for them to nest in, it being mainly scrub there. The suggestion had been to hammer in some tall posts among the scrub, with suitable baffles to protect the boxes from Weasels or other similar predators.

Thanks to the York Ornithological Club we were provided with a grant earlier in the year and ordered boxes, hole plates along with steel sheet to make the baffles.

Despite the wet weather Julie, Mark, Judi and Mick got the materials to a suitable location and, after cutting a few tiny Blackthorn saplings, erected the posts adjacent to some Tansy and Elm planting.

The next job was to fix two boxes to each post at which point Kevin and Masha joined us. The scrub will soon hide the posts but some management may be needed to ensure there are no jumping off points for squirrels to attack the boxes. 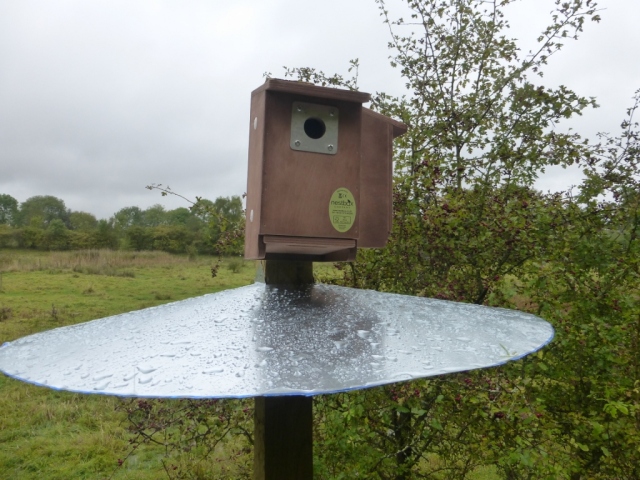 It is not expected that the Environment Agency’s works will affect that area but who knows as there plans are so vague, but at least the small birds that frequent the Meadows will have somewhere to retreat to when the large sections and hedgerow and numbers of trees are eliminated forever.

Thanks to the six for braving the damp and the YOC for their financial assistance.

Next work party is Sunday 17th November 2019 when we will probably be repairing the fence around the Water Vole Scrape as the cattle have started making inroads. As well as Water Voles, this is now Great Crested Newt habitat and also of the Greater Water Parsnip, so the less trampling the better!

If there is now some juggling of work party tasks it is to avoid areas that the EA’s contractors are likely to damage when they come on.

Researcher and practioner in matters relating to egovernment, government ICT and their approach to the citizen.
View all posts by greatemancipator →
This entry was posted in News item, Site Management, Work Party and tagged Friends of Rawcliffe Meadows, Rawcliffe Meadows, Tree Sparrows, York Ornithological Club. Bookmark the permalink.