Posted on 18 November, 2019 by greatemancipator

Despite the dark cloud of the Environment Agency’s planned upheaval and the forecast rain we managed a splendid seven volunteers to help with our annual spruce up of the Water Vole Scrape (now also home to Great Crested Newts, Greater Water Parsnips and many more rare and wonderful creatures. It also didn’t rain.

The Phragmites was soon cut back to encourage fresh growth in the spring and the Reed Bunting returned when the chopping stopped and we moved on, after a coffee and biscuit break (thanks, as usual, to Judi) to repairing the fencing that had started to rot in the damp ground.

Phragmites beforeWith its new posts the area should be protected for the next year or two. 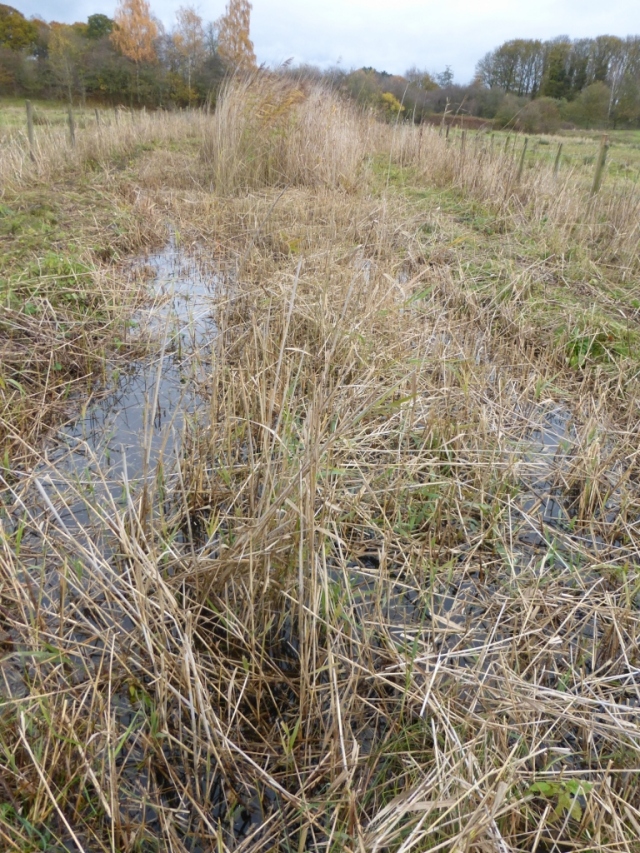 The Water Vole Scrape is one of the many ponds in the Reservoir Basin that make the site one of the Freshwater Habitats Trust’s Flagship Sites and so we’ll care for it until our commitment is removed by force majeure and the EA’s bulldozers.

The Water Vole Scrape after its clean up

The site was looking well despite the bags of dog poo still flung habitually into its corners – probably by those who complain about the grazing cattle. The next work party is on Sunday 15th December from 10:30 in the Copse to the north of the site. It doesn’t get as much attention as it deserves but as we strive to maintain those areas like the Reservoir Basin, Copse Meadow and the Cornfield ignored in the EA’s plans and the Natural England and City of York planning mitigation, we can check the stakes and collars on the Elm saplings, clear up the brash and prepare it for a future without TLC. Thanks to Judi, Mark & Julie, Mark A, Kevin, Fiona and Pete for all their help in the mud!