Posted on 15 March, 2020 by greatemancipator

Due to flooding and dismal weather this was our first work party since January 5th! We’d had a number of apologies but there were still five of us (Judi, Fiona, Pete, Andy and Mick) ready at the Cornfield gate, where we were greeted by the sight of a Red Kite quartering across the field.

The hole we had excavated the sand for the bank from was still full of water and will make a great temporary pond but the bank itself was looking under the weather after the wet spring. The green roof we had planted with Sedum was finally flourishing  but had collapsed at the front so we lifted it back and redistributed the clumps of Sedum.

We then cut back the vegetation around the bank and hole and made it look a bit happier. There were numerous holes of various sizes bored into the sandbank, logs and pipes filled with sand, so presumably working as intended. The netting you can see in the picture was nothing to do with us and was installed by the ‘Environment’ Agency (EA) to keep Badgers out when they started surveying for the flood scheme. 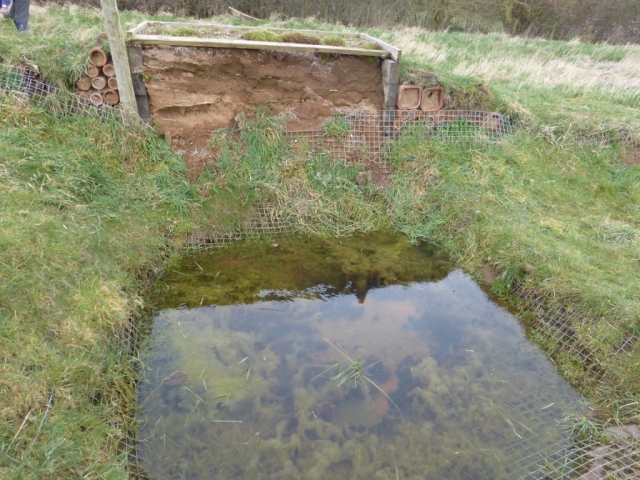 We then headed to the Cornfield to check on the hedgelaying carried out under Council auspices without our consent when unfortunately they had trampled a lot of the  Gorse, Holly,Hawthorn and Hazel planted in recent years and given some dog walkers a route across into the Cornfield to nuisance the birds and deer, instead of repeatedly breaking through the gate we’ve tried to block up.

We also picked up plastic debris from the flood line and sadly found the corpses of two hedgehogs that must have succumb to the flooding in their hibernation quarters, not something we’ve seen before.

The Tansy by the Bee Bank and in the Cornfield corner is only just poking through but we noted more than twenty trees we’d planted over 25 years ago outside the Cornfield by the cycle track had been marked by white crosses, presumably for destruction when the EA get their final consent. There is, as yet, no mitigation planned for tree and hedge loss which will be substantial.

We then checked on the Copse Meadow and the Copse. Copse Meadow is still a quarter flooded and a lot of debris was about in the Copse but we’ll use that to build up the gap into the Cornfield that the flood has washed out rather. The Elm trees we planted five or six years ago were doing splendidly.

The next work party is planned for Sunday April 19th from 10:30 onward at the New Meadow where we’ll be taking care of the Tansy plantation there and seeing what Tansy Beetles have survived.

Researcher and practioner in matters relating to egovernment, government ICT and their approach to the citizen.
View all posts by greatemancipator →
This entry was posted in Site Management, Wildlife Report, Work Party and tagged bee bank, Environment Agency, flood debris, Friends of Rawcliffe Meadows, hedgehogs, Tansy Beetle. Bookmark the permalink.