Every year we hear of a complaint or two to City of York Council about cattle grazing on the meadows adjacent to Clifton Ings behind the former Clifton Hospital. The area is neither owned nor managed by the Council and whilst not everyone is delighted to see cattle grazing on Rawcliffe Meadows, they are natural, traditional and a necessity. The site, although owned by the Environment Agency, receives no direct funding to maintain it from anybody. Its sole source of management funding is from the Countryside Stewardship scheme currently operated by Natural England. The site has been on the scheme since 1991, the agreement having been renewed for two ten year terms after the initial one. Neither Clifton Ings nor Rawcliffe Meadows are public parks, they are the remnants of ancient flood meadows, which are an internationally rare resource containing certain uncommon plants. As flood meadows they need to be managed in an appropriately agricultural manner, which is the one described, dating back many hundreds of years.

One of the management requirements placed upon the site as part of Countryside Stewardship is that it is grazed following the hay being cut. An alternative would to be cut once or twice more but this is neither affordable nor practical. The ancient method of aftermath or Lammas (Lammas day is 1 August but in the ‘old’ calendar 12 August) grazing that was reintroduced basically consists of having a small number of cattle on for some weeks, following the hay crop being taken in late June or early July. The cows are then taken off towards November before the ground becomes too soft and in danger of being ‘poached’. This process of cutting and grazing compensates preventss a monoculture arising with few herbs and mainly aggressive weeds or grasses.

These flood meadows or washlands are more recently primarily there to protect the City of York in times of flood, which prevents them from building development, whereas others have seen some development, such as Rowntrees’, Park, a meadow until shortly after World War I.

The site has now been notified as a Site of Special Scientific Interest by Natural England on the basis of the rare grassland and the Tansy Beetle habitat. Without grazing this grassland and habitat would disappear. The beasts that are grazing are harmless and will move out of the way if approached reasonably, whilst a few can be nosey, most are more frightened of humans, than humans should be of them.

On occasions the cattle used  to graze may be suckler calves with their mothers and possibly a very tame bull to help keep the cows calm. The cows, as with any mother, will be protective of their young, and the bull protective of the cows he’s with. On this basis dog walkers are strongly advised to keep their animals under control and if necessary on a lead. Never intervene if a cow corners a dog on the loose, the dog will probably get away, the human may not! 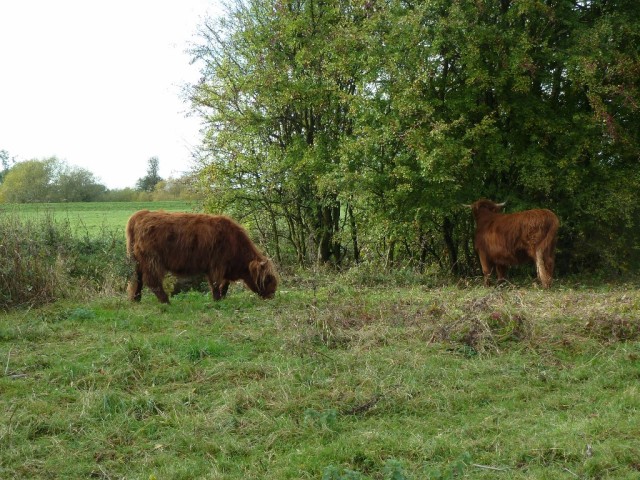